Flashing my Lenovo x200 with Libreboot

I accidentally botched my original Libreboot flash during an update, so I decided to take some pictures and type this guide to hopefully help someone else.

Main bit of advice here is to read over the directions once before proceeding then once you start, go slowly!

While this process worked for me, you may not have the same results. Please do your homework before attempting this and don’t blame me if you mess something up.

I own a Lenovo X200. I haven’t used a X200S or a X200T. Refer to Libreboot’s site for instructions regarding other models.

I am using a desktop computer running Debian Stretch, so you may or may not need to change the commands depending on your OS.

You can click on the images for a larger size.

For the code blocks on this tutorial, pay attention to the command prompt. I made sure to keep the hostname relevant to which system the commands should be run on.

After the hostname, it shows the current directory. Eg:

First, gather the supplies needed to perform the flash. 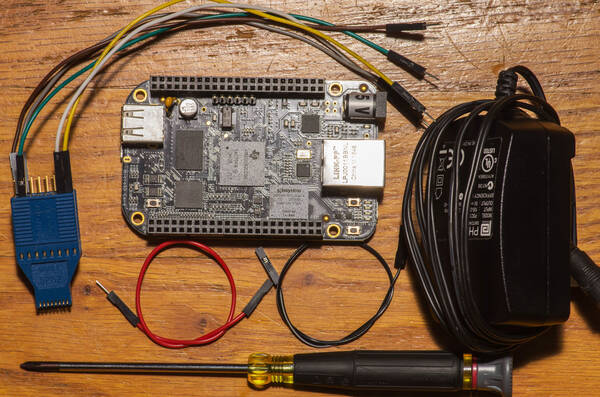 These instructions are currently for Libreboot 20160907 which has a different gpg signing key than Libreboot 20210522 and newer!

We need to download the necessary files from the Libreboot site and have them all set up and ready to go for when we get the BBB connected to the X200.

From your main computer:

You need to verify what size flash chip your X200 has. That will be done below at the Checking Communication section. If you’re not sure, come back to this section once you know what rom to download.

Now we can verify that the files we downloaded are the same as what is on the server and that they weren’t tampered with or switched during download.

We need to set the MAC address for our wired interface in the rom. There are a few ways to get it.

Remove the battery then proceed to take the screws out of the bottom of the X200. I circled the nine screws in the image below 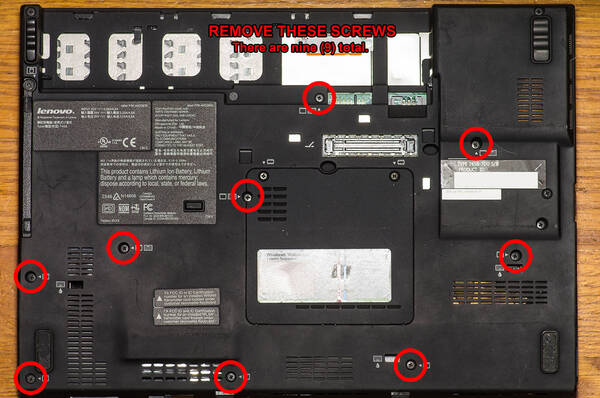 After removing the screws, flip the X200 over and open it up. Place your fingers somewhere around the <Ctrl> keys and push towards the screen. You shouldn’t need much pressure for it to slide forward. It won’t go very far, maybe 1/8″. 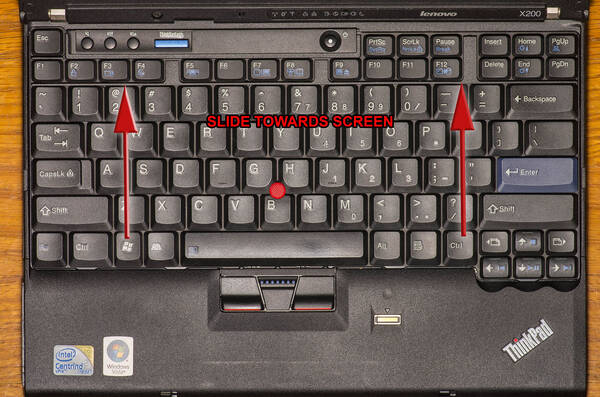 Once it slides forward, you can pry it up from the mouse buttons. Be careful not to pull it too far out, it’s still connected to the motherboard. I just laid it on the palm rest. 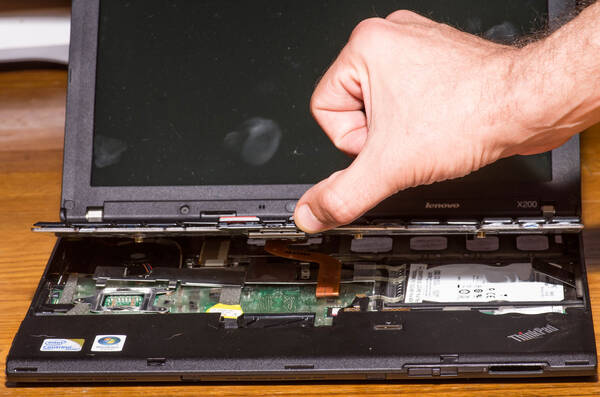 Grab the tab circled in the picture below and pull it away from the motherboard to disconnect the keyboard. After it’s disconnected, set the keyboard aside. 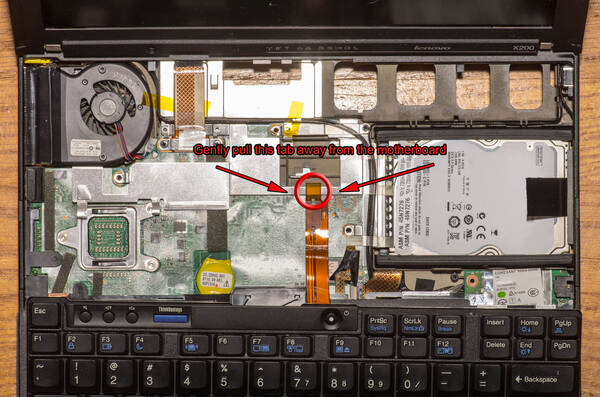 With the keyboard out of the way, you can now see the connector from the Fingerprint Sensor. On my previous flash a few years ago, I had already disconnected mine and I didn’t think to edit picture to circle it until after I put everything back together. (In the image above, it’s the smaller ribbon cable with black tape on it.)

After you disconnect the Fingerprint Sensor, you can lightly pull from where the keyboard used to be and lift the palm rest away from the X200. Once it’s free, set it aside. 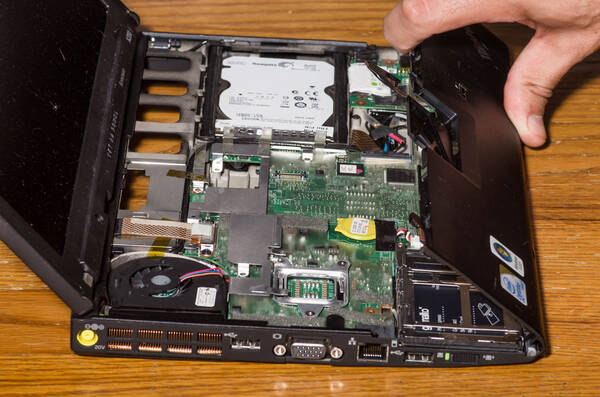 Now would be a good time to disconnect the camera, microphone and any other devices if you want to. You could also continue disassembling the laptop so you can apply some fresh thermal paste to the processor but I won’t cover any of that here.

You should now be able to see the chip we need to access in order to flash Libreboot. I have it circled in the image below. I also labeled the pins so you know the order that they are numbered for when it’s time to connect them to the BBB. 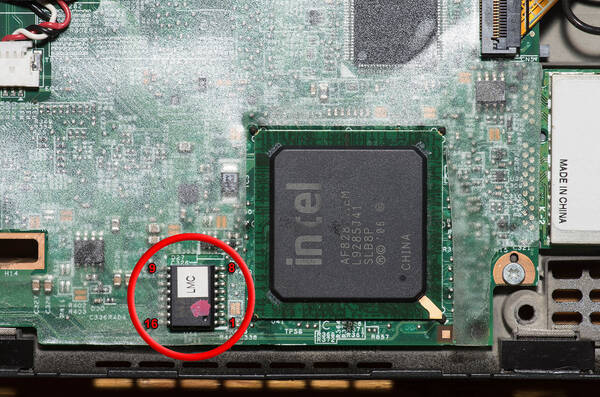 Peel the clear plastic film back to keep it out of the way. I used electrical tape and taped it to the CMOS Battery. 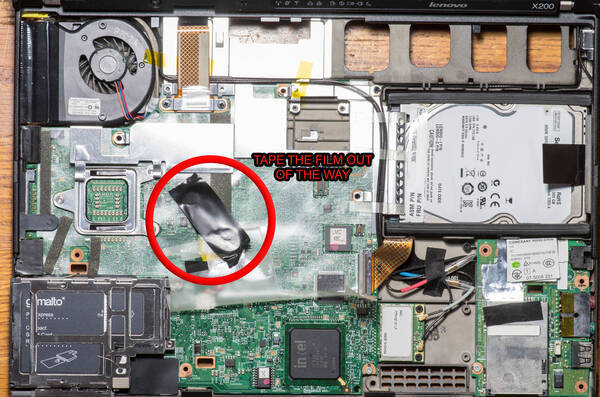 I chose to do a fresh install of the OS before flashing my X200. I would at least recommend updating the BBB so you can follow along with this tutorial. Somewhere between the time I originally bought the BBB and now, they changed the process of enabling SPI for the pins.

If you would like to update the MMC on the BeagleBone Black, head over there and follow the instructions. I’ll get a guide going soon and will update this post with a link.

After you have a fresh OS installed or updated the existing OS , make sure you can SSH to it from another computer.

If you’re using an old PSU with a 20 pin connector, I would highly recommend verifying that you’re using the correct pins before connecting it to the flash chip. Applying more than 3.5 Volts to the chip can destroy the chip so proceed with caution!

First we need to make a jumper to go from the green wire to the black wire so the PSU will turn on. The smaller bend of a large paper clip fits perfectly. After the jumper is installed, go ahead and plug in the PSU.

Once the PSU is running, check voltage between any Orange wire and any Black wire. You should have roughly 3.5 Volts DC. I had to bend some pieces of paper clips to hold the test leads while I took a picture. 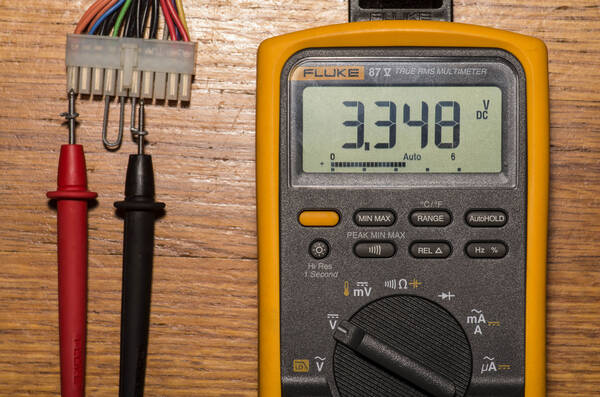 Here’s the order in how I connected things and was successful. YMMV. I made sure to connect the grounds first as a safety measure. I connected the 3.3 Volts last.

Now that we’re all connected we need to verify that we can communicate with the chip.

You can see that it found the Macronix flash chip and that it’s 8192kB. That lets us know that we need to use the 8Mb rom from the Libreboot mirror. If you need to, go back to Prepare the Files and download the proper rom and follow the steps up to disassembling the X200.

We need to make at least two copies of the factory rom, then check the shasums so we can verify that they are the same. If they are different, keep trying. You may want to check the connections between the BBB and the chip and/or the length of the wires. Reducing the spispeed may also help.

I used the time command to show how long it took to complete the transfer. You don’t have to use it if you don’t want to but at least this gives you an idea on what to expect time-wise.

And now for the moment of truth!

Now you can breathe a sigh of relief. That VERIFIED is a beautiful thing to see!!

If you’re planning on using wifi, it is recommended to replace the factory Intel wifi chip. The factory chip requires proprietary software to work correctly, and we’re librebooting to rid our x200 of closed source software!

For reference, I replaced mine with an Atheros 9285G and the Libreboot tutorial shows them using a Atheros AR5B95.

You can now proceed to reassemble the laptop in the reverse order that it was disassembled.

Now you can install your favorite GNU distro!

Here are some of the solutions to common problems that I’ve come across.

This was a fun little project but I didn’t realize how many steps were involved until I started writing this guide. When I was in the process of doing the flash, it didn’t seem so long and complex. I struggled in attempting to give enough information without over complicating things or rambling on. I hope I succeeded in creating an easy to follow tutorial.

Feel free to leave a comment if you have any troubles and I’ll do my best to help.